Tunisia 'Of the Beaten Path' - Carthage and Djerba

In all my enthusiasm I immediately said YES when the Tunisian Tourist Office invited me for a press trip through their country. I couldn’t predict that Tunisia would impress me this much and would get me out of my comfort zone when it comes to photography.

On a cold Monday afternoon in February it was time to drive to Schiphol airport again. Weather forecasts predicted ‘Siberian’ temperatures in the Netherlands for that week, while I was about to fly to Tunis for a roundtrip which would bring me and four other Instagrammers/travel bloggers to some of the best places Tunisia has to offer. The flight to Tunis from Amsterdam takes about two and a half hour and around nine o’clock in the evening we land according to plan. When we all have our bags again we pass customs where Nabil from the Ministry of Tourism is waiting for us to take us to our hotel in Sidi Bou Said.

Sidi Bou Said is a small town just north of Tunis. It’s well known for its blue and white houses and located on a steep cliff where it overlooks the Mediterranean Sea. Tonight we’re staying in ‘Hotel Dar Saïd’, a small hotel located in an old bourgeois house where all the rooms are built around patios. Every room is decorated with traditional earthenware to give it that Arab-Andalusian style which brings you back in time. After checking in we’ve dinner in ‘Dar Zarrouk‘ which is situated nearby the hotel. In a beautiful ambience we have some traditional Tunisian food before we hit the decks. It has been a long day and tomorrow morning sunrise looks promising.

Waking up in the blue and white Sidi Bou Said

After having a great night sleep, my alarm sounds at 6 am. Me and my fellow Instagrammers @jeanpaulbardelot, @nappyc and @mylenecybele have an appointment with sunrise. At 6:30 am we’re off to the most northern point of the town where we can see the upcoming sun over the Mediterranean Sea. Before we arrive at the cliff we run into a beautiful tree at the end of the street decorated with some fine art. The ladies do a bit of posing and we set foot to the cliff which is just behind the street.

The horizon can hardly be seen due to a layer of fog which is covering the water at some points and coming ashore in the city which is laying below us. After a few minutes the sun rises from the fog and colors the sky and clouds in it’s favorite colors. For me sunrise is still the best time of the day! 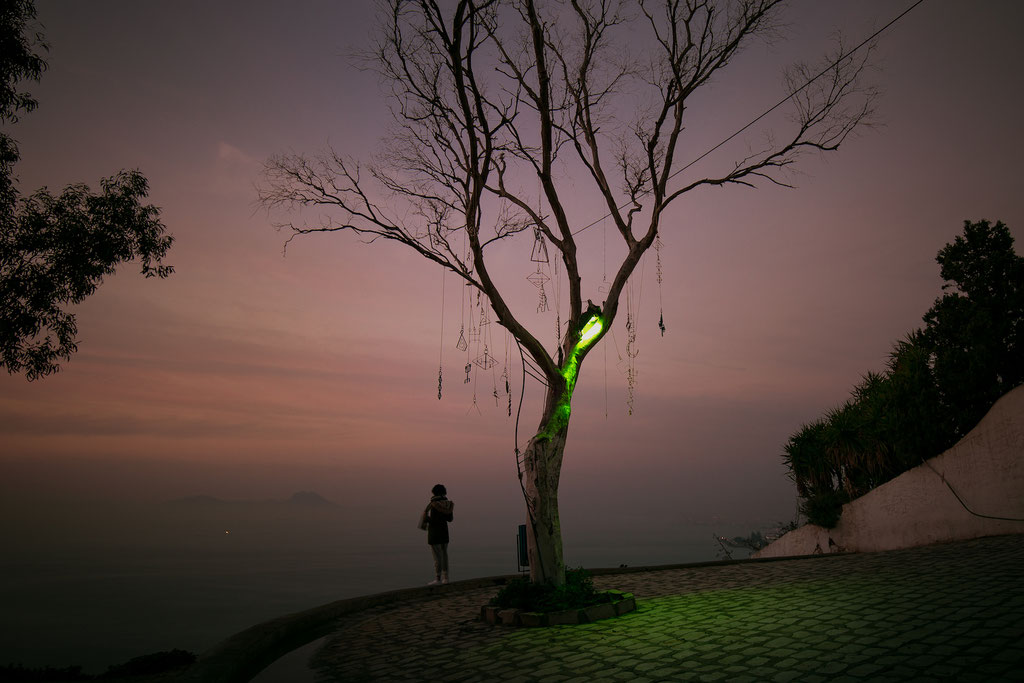 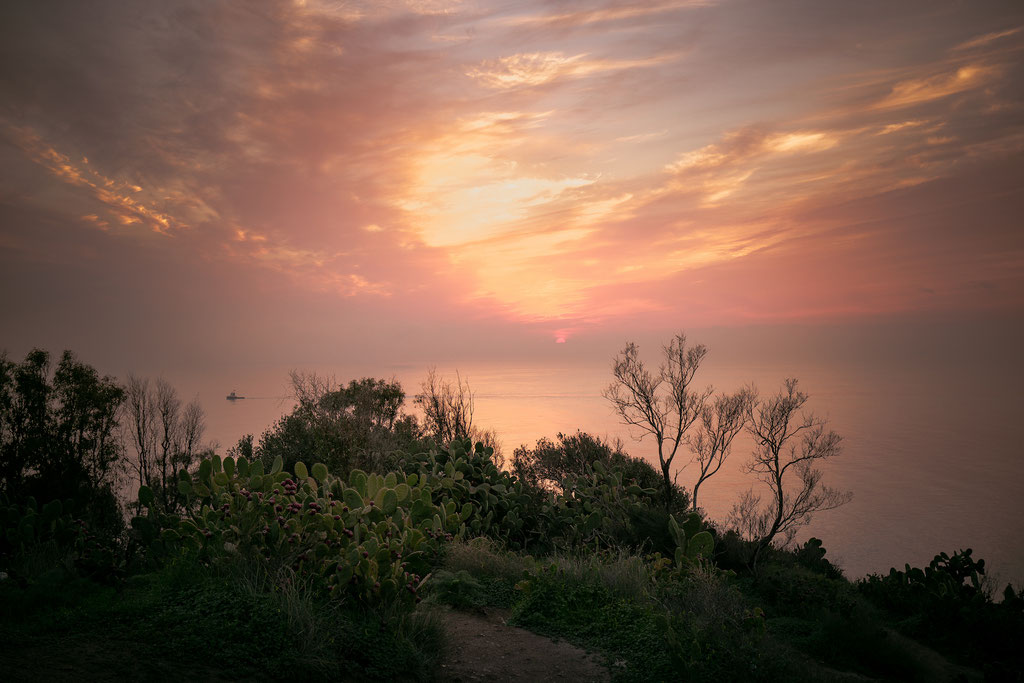 Having witnessed a beautiful sunrise we hit the blue and white streets of Sidi Bou Said. Just around the corner there is ‘Café des Délices‘ a famous café which is build aside the cliff with a beautiful view over the marina and town. After we’ve taken some shots, we’re asked if we want to have some coffee or tea. Surprised by the question, since it’s so early and outside opening hours, we all decided to have coffee. Wrong choice! The coffee we get is cold and tastes like it’s one or two days old. I guess we should have waited till opening time. Just to be friendly we drink the black stuff and pay too much for it. We all laugh about it and continue our walk, the kindness of the two employees and the setting made it a rememberable moment.

Tunisians building and preparing for a new tourism boost

Sidi bou Said is waking up, the rising sun is giving the streets a golden glow and everywhere people are preparing their shops for opening time. This town depends on tourisme and after two sloppy years it’s noticeable they’re ready to welcome new tourists. New shops are build and the kind people are showing us around and tell about their culture and history.

We stop at a little ceramics shop where the owner is waving to us. After we introduce ourselves and tell him what we’re doing, he offers us to come in and enjoy the view over the town from his terrace. After we’ve taken some shots, we thank the owner for his kindness and the beautiful view. We’ve to go back to the hotel for breakfast and our next stop. 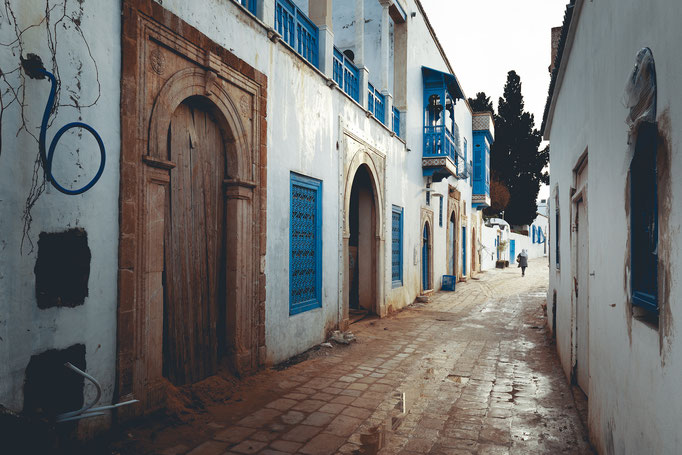 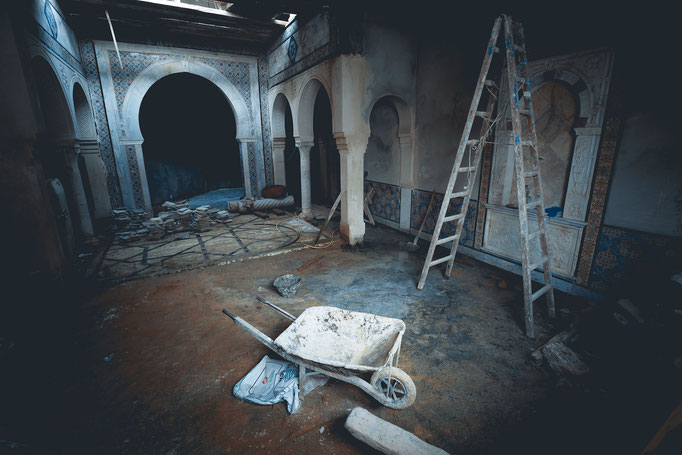 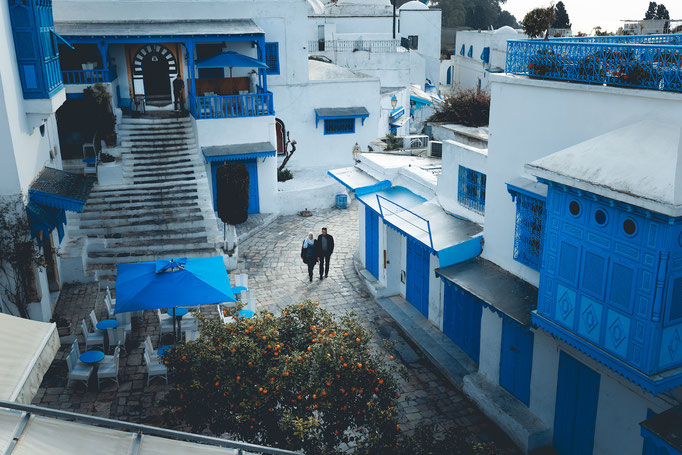 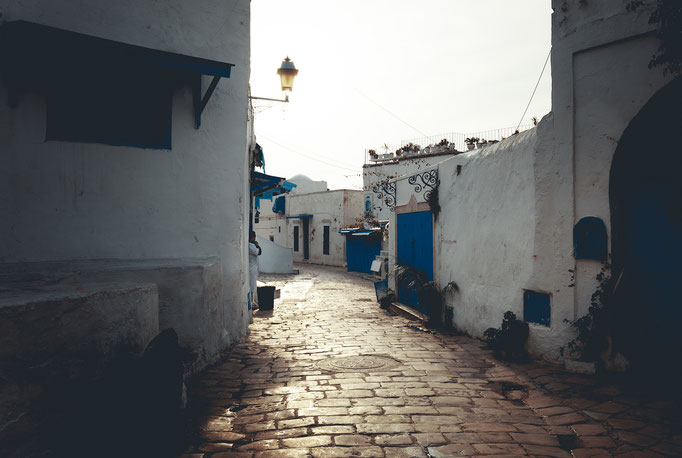 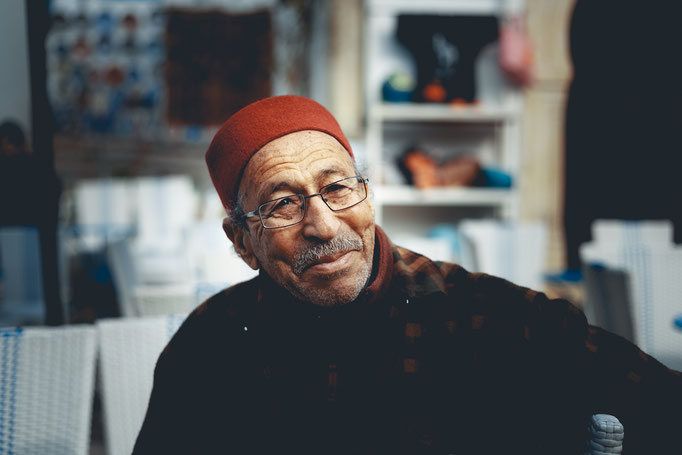 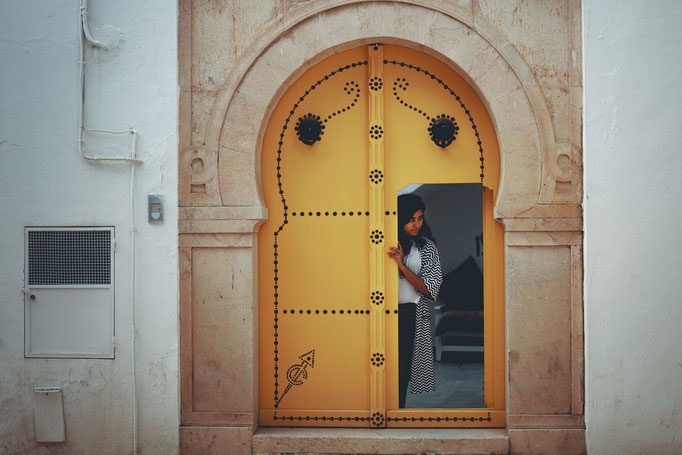 The ancient city of Carthage

Carthage was a major city of the Roman Empire and with its strategic location at the Tunisian coast it became master of the Mediterranean’s maritime trade. There’s still a lot of archeological proof and this morning we’re going to visit ‘Saint Louis Cathedral’ and the ‘Thermes d’Antonin’.

The Saint Louis Cathedral is an ancient Roman catholic church which nowadays is used to host public events and concerts. Around the cathedral a lot of ruins can be found and the ‘Carthage National Museum’. A few minutes away are the Thermes d’Antonin, an old Roman bathing house which was one of the biggest built in the Roman Empire. I love the stories Nabil is telling us about the history of his country while he is guiding us from one ruin to the other. The man is a walking encyclopedia and his proud and enthusiastic way of telling makes this walk through time. 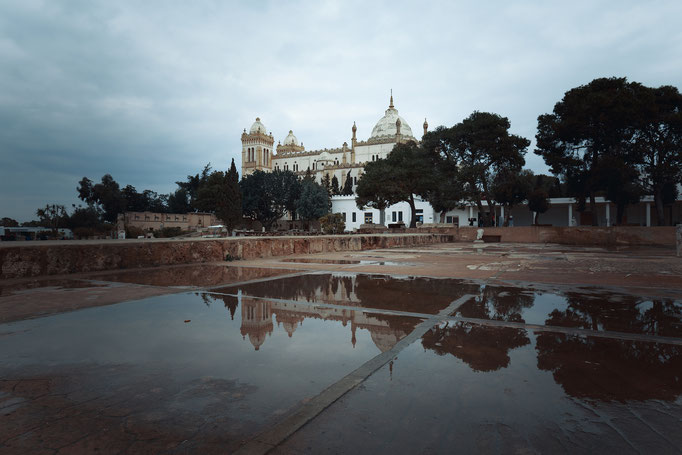 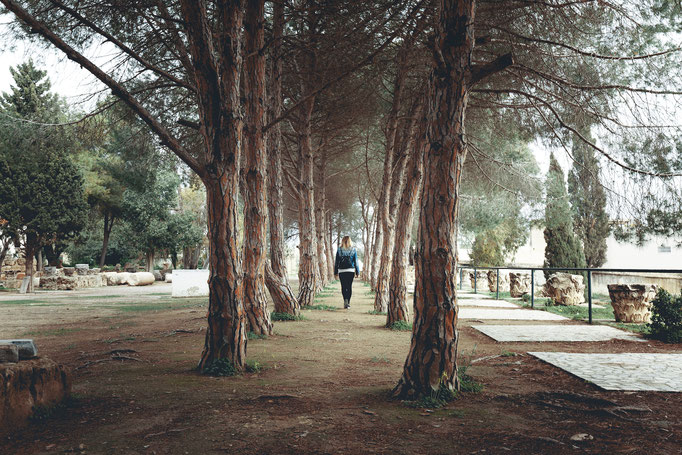 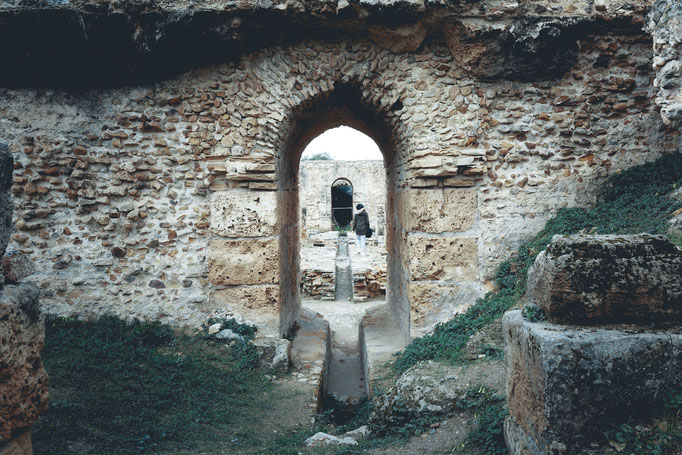 When we’re ready with taking our shots we go back for lunch and to pick up our luggage in the hotel since we’ve a domestic flight to catch to our next stop Djerba.

Melting pot of cultures and beliefs

Late in the afternoon we land in Djerba. The group has been split up since we were too late at the airport in Tunis. The rest will take a later flight and rejoin the group in the evening. It’s cloudy and raining when we leave the airport in Djerba for a tour in the ‘Djerbahood’. The Djerbahood is an art project in the streets of the town Erriadh. Artists from all over the world and from diverse cultures have turned this town in a panorama of street art.

A guide is waiting for us with a little surprise, instead of walking we’ll do the tour on Segways. For me it’s the first time on a Segway and knowing the owner of the company drove himself from a cliff while testing this cross country version, doesn’t give me a confident feeling. But after a wobbly start I get the hang of it and I’m able to move myself around in the streets of Erriadh. Our guide is taking us from one art piece to another, telling the stories behind it. This whole exposition is a reflection of what Tunisia is about, a melting pot of cultures and believes living in peace and respect to each other.

Besides the beautiful pieces of art I love the people and mood which is hanging in the streets. Every now and than I feel myself walking on a giant filmset, moving from one surrealistic scene to another. 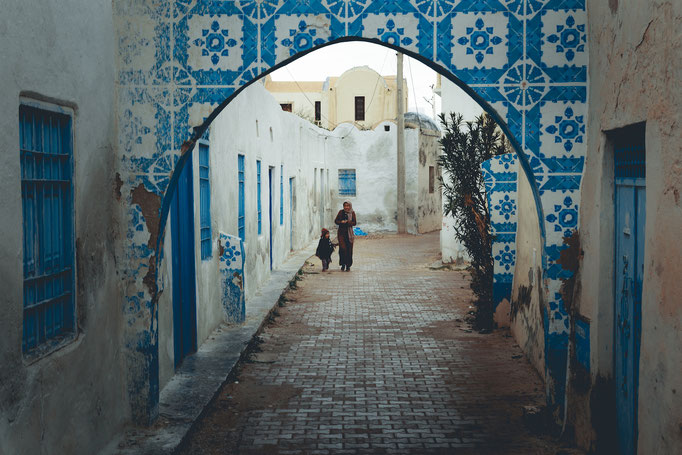 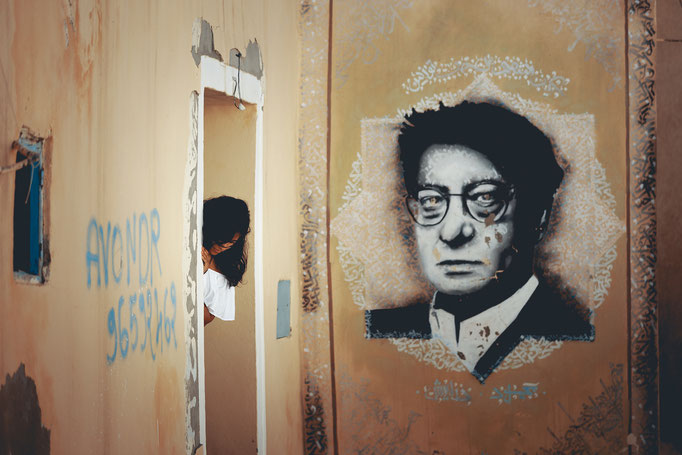 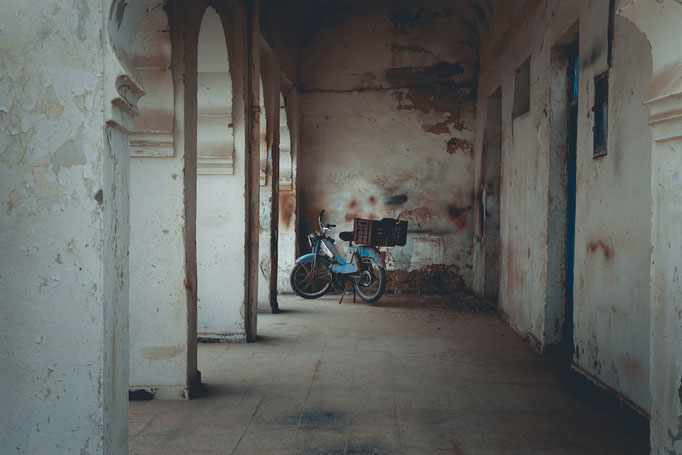 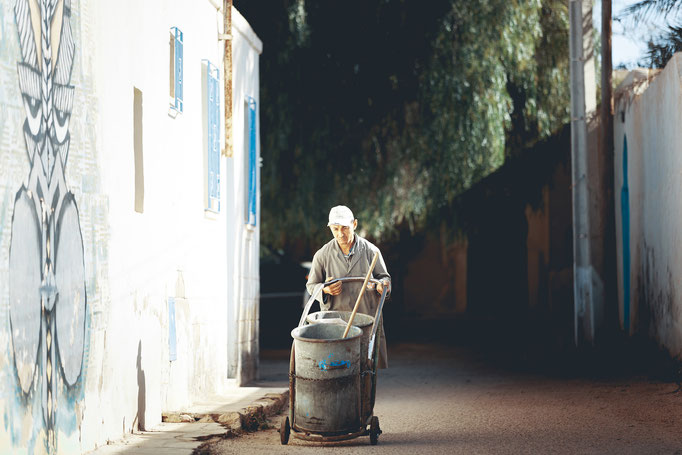 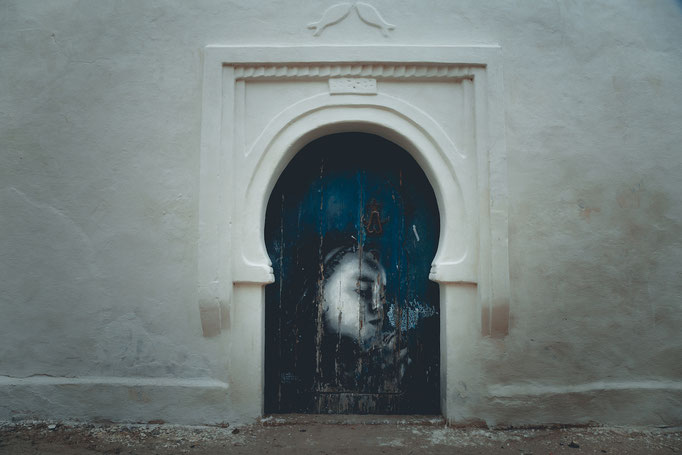 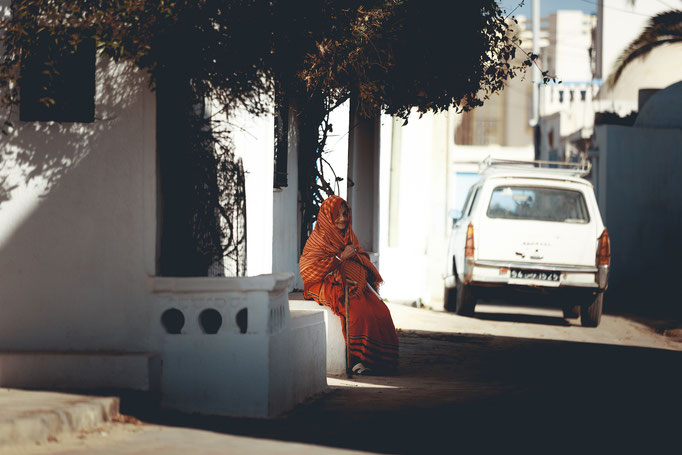 It’s time to leave the beautiful streets of Erriadh and go to our hotel. We stay at the ’Radisson Blu Palace Resort & Thalasso’ in Houmt Souk, situated near the Mediterranean Sea. After we’ve all checked in, we hit the bar to wait for the rest of the group to join us again for dinner. Once complete we talk about our schedule for the next day, since a part of the group didn’t see the Djerbahood and became enthusiastic hearing our stories. Having some flexibility in our schedule, we decide to include it again in our morning program.

The next morning everybody is alarmed by a strange noise. Opening the room door explains it, a flock of birds is flying through the indoor garden of the hotel and providing us with a natural wake-up call. After having my own morning ritual I decide to have an early breakfast and a so needed good cup of coffee. It’s still quiet in the restaurant and while the rest of the group is showing up, I enjoy my personal can of coffee which one of the waiters brought me. There’s nothing so good as the smell of fresh coffee in the morning!

We’re picked up this morning by two 4x4 jeeps to take us from Djerba to our final destination of today Tozeur. Our first two stops are the local Bazar Houmt Soukh and the Djerbahood, before we continue our way to the El Ghriba Synagogue. The history of this synagogue dates back to 586 BCE and is the oldest in the Mediterranean region. The inside of this building is richly decorated and the walls are covered with hand painted ceramic tiles. When I put on the yarmulke which I was given, I enter the prayer room which is enlightened by the morning sun coming in through a side window. I always come in a peace state of mind entering religious buildings like this. I sit down on a bench which is standing behind me, enjoy the moment and watch a man lighting the candles. 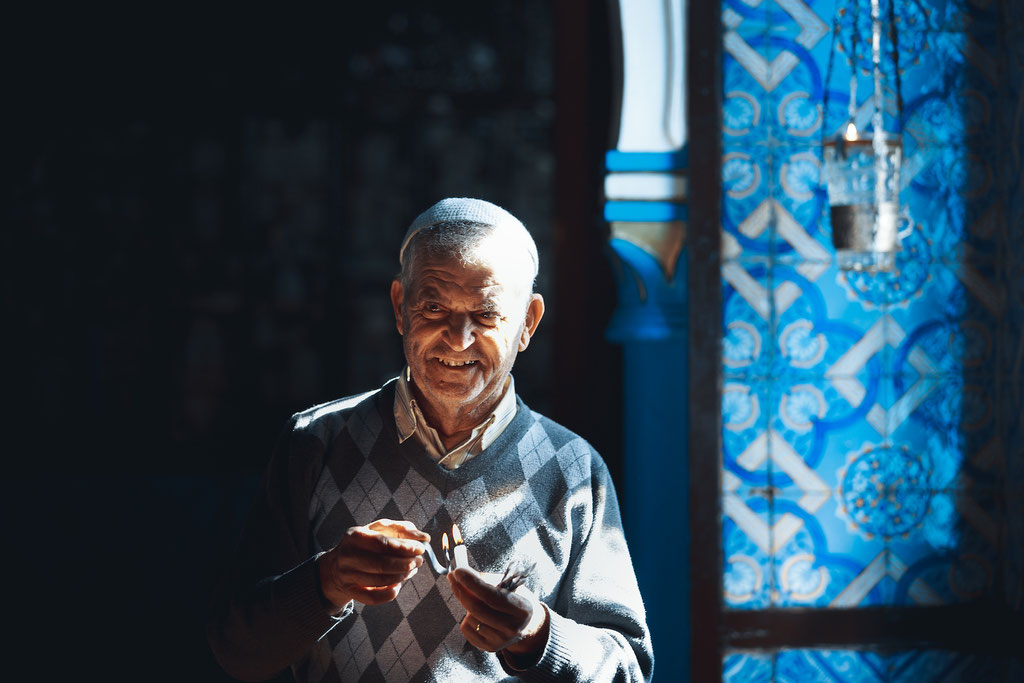 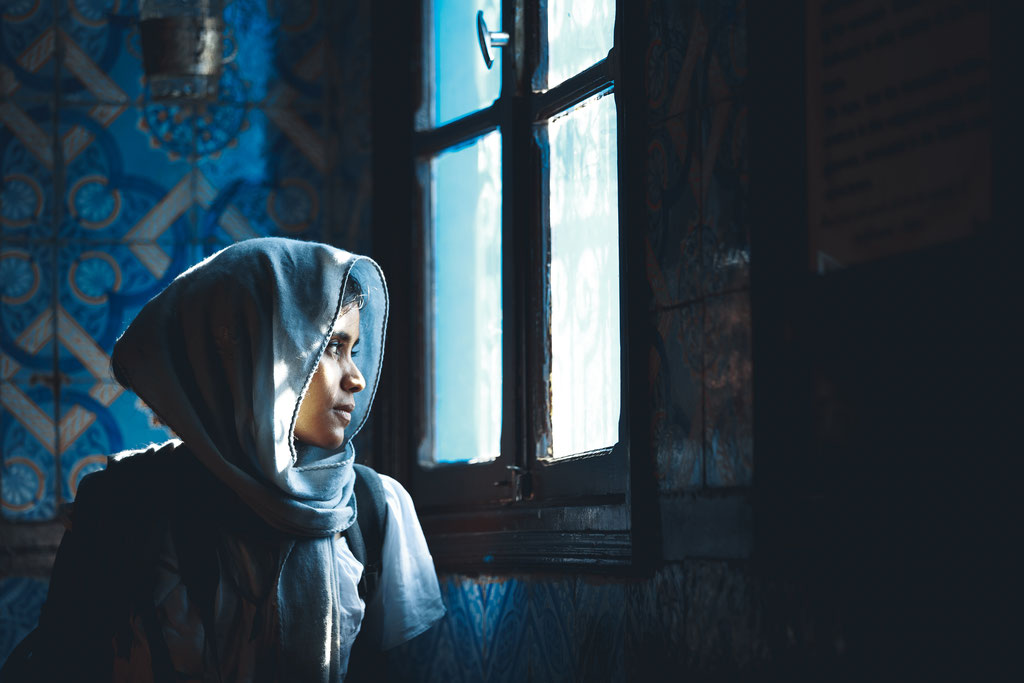 Relaxed and with a smile on my face I leave the synagogue back to the car, it’s off the beaten path towards Tozeur.